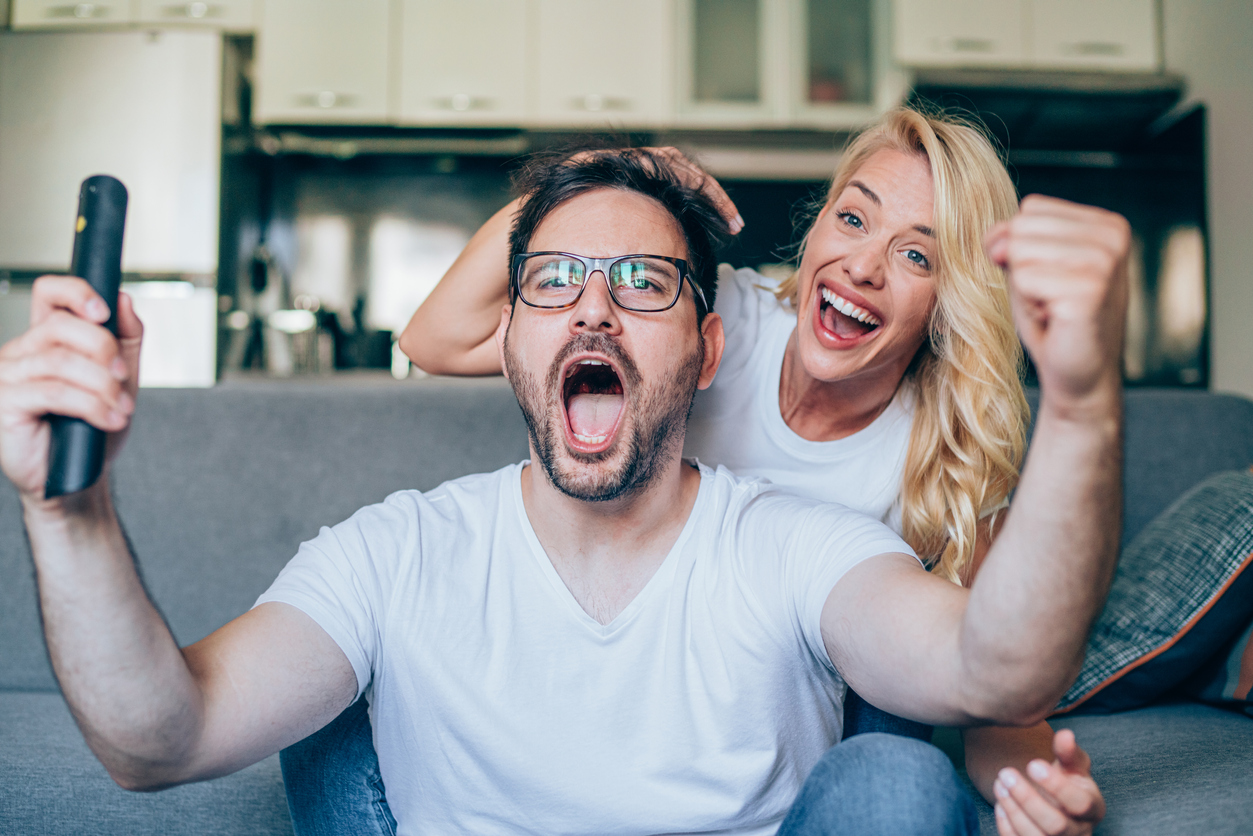 The symbiotic relationship between television and sports can be complicated at times, particularly when it comes to the numbers.  Some sports statistics are straightforward – e.g., the team that scores more points wins the game, teams that win more games make the playoffs, etc.  Other comparisons are less conclusive, though.  For example, the football team that won 12 games five seasons ago is not necessarily better than a team that earned 10 victories last season.

Television stats work much the same way.  Comparisons made within the context of the current season can provide insight as to which networks and programs are attracting more viewers.  But attempting to compare across seasons gets trickier.  In TV as in sports, the players and situations change year to year.  That is perhaps no more evident than this current season, which continues to elevate “unprecedented” to the top of any list of the year’s most-quoted buzzwords.

Advertising executive Tom McGovern, president of Optimum Sports, the sports media division of Omnicom Group, spoke to this challenge specifically as it relates to a professional basketball season that has extended well beyond Labor Day.  “There is no proper context to compare the current NBA viewership post-COVID to any regular season,” McGovern told Variety.  “You’ve got an increased number of broadcast windows and start times that are an anomaly for this current season.”(1)

With that background, here are three key TV sports insights from August that shed some light on the current season: 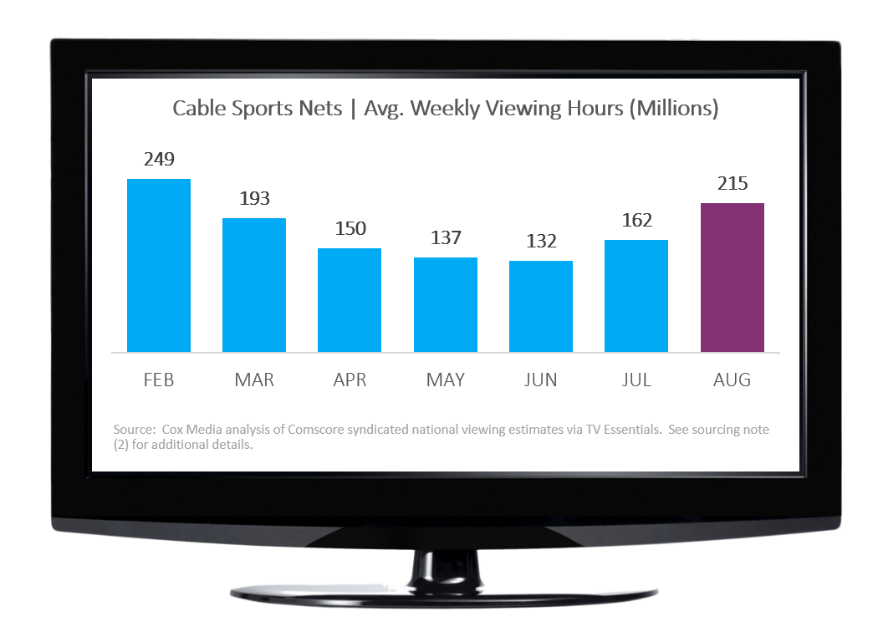 2. BASKETBALL BOUNCED TO THE TOP OF AUGUST CABLE RANKINGS

The August sports scene typically is dominated by baseball and the kickoff of a new college football season, but August 2020 was…well, anything but typical.  With the conclusion of the NBA regular season giving way to the playoffs, basketball soared to the top of the TV rankings throughout the month, particularly among younger viewers.  In the key 18-49 age group, the top five most-watched Cable telecasts in August were NBA games, according to Cox Media analysis of national Nielsen data.  Overall for the month, NBA and political convention coverage scored Cable’s top 10 telecasts among viewers 18-49 – and NBA coverage alone accounted for 43 of Cable’s top 100 telecasts in that demographic.(3) 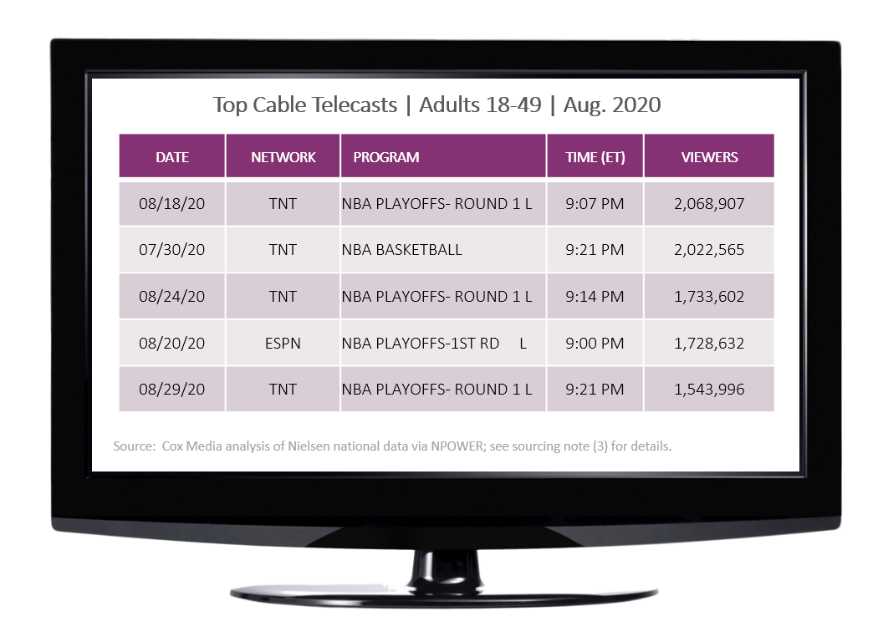 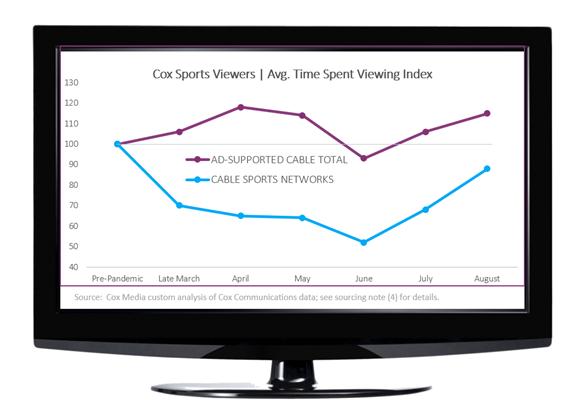 Part of the attraction of televised sports is the unscripted drama of what will play out on the court, on the ice, or on the field.  In this most uncertain of years, the draw of uncertain outcomes is one observation from previous seasons that likely carries over.  Even without fans in the stands, sports viewers are likely to keep tuning in as long as the games are played.  Perhaps the Columbia Journalism Review said it best a few years back:  “There is no single answer to why people watch sports, because the answer doesn’t lie in the game, it lies inside the individual.”(5)

Visit coxmedia.com for helpful advertising tips and additional information on how best to reach those individual viewers, regardless of which team or sport they follow.