Long before the proliferation of streaming video services, the phrase “Over the Top” may have been best known as the title of a Sylvester Stallone flick about the high-stakes world of competitive arm wrestling. The soundtrack for that cinematic masterpiece featured a Kenny Loggins hit called “Meet Me Halfway” – which is where we find ourselves on our 2021 Audience Insights journey.

Here now is a look at three TV viewership highlights from the first half of this year:

1. Most TV Viewing Happens Outside of Primetime 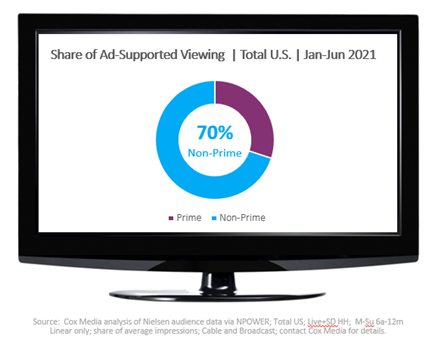 The traditional primetime viewing hours still pack a powerful punch, but advertising throughout the day can help marketers maximize the effectiveness of TV campaigns. According to Cox Media analysis of Nielsen national data, more than two-thirds of total-day viewing impressions fall outside of prime. That means twice the available audience throughout the morning, afternoon, and early evening hours vs. the primetime window.

2. More TV Viewers Turn to Cable Throughout the Day 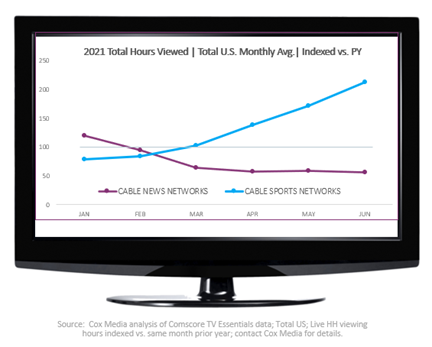 As outlined in our year-end review article, 2020 was a different TV year in many ways. During the first half of last year, breaking news helped Cable news networks break records, while cancelled games and postponed seasons sent Cable sports networks to sub-par audience levels. By comparison, 2021 seems to have brought a return to more normal viewing patterns. Based on Cox Media analysis of Comscore national data, U.S. TV viewers steadily increased their time spent watching Cable sports networks throughout the first half of the year. Meanwhile, time spent viewing Cable news networks has stabilized after last year’s record highs.

As Bon Jovi has so aptly and famously observed, “Whoa, we’re halfway there” in our 2021 Audience Insights journey. We’ll be back next month with more observations. Until then, stay tuned to coxmedia.com for helpful advertising tips and additional insights.